The Campaign’s early years – from Gordon’s to Plymouth 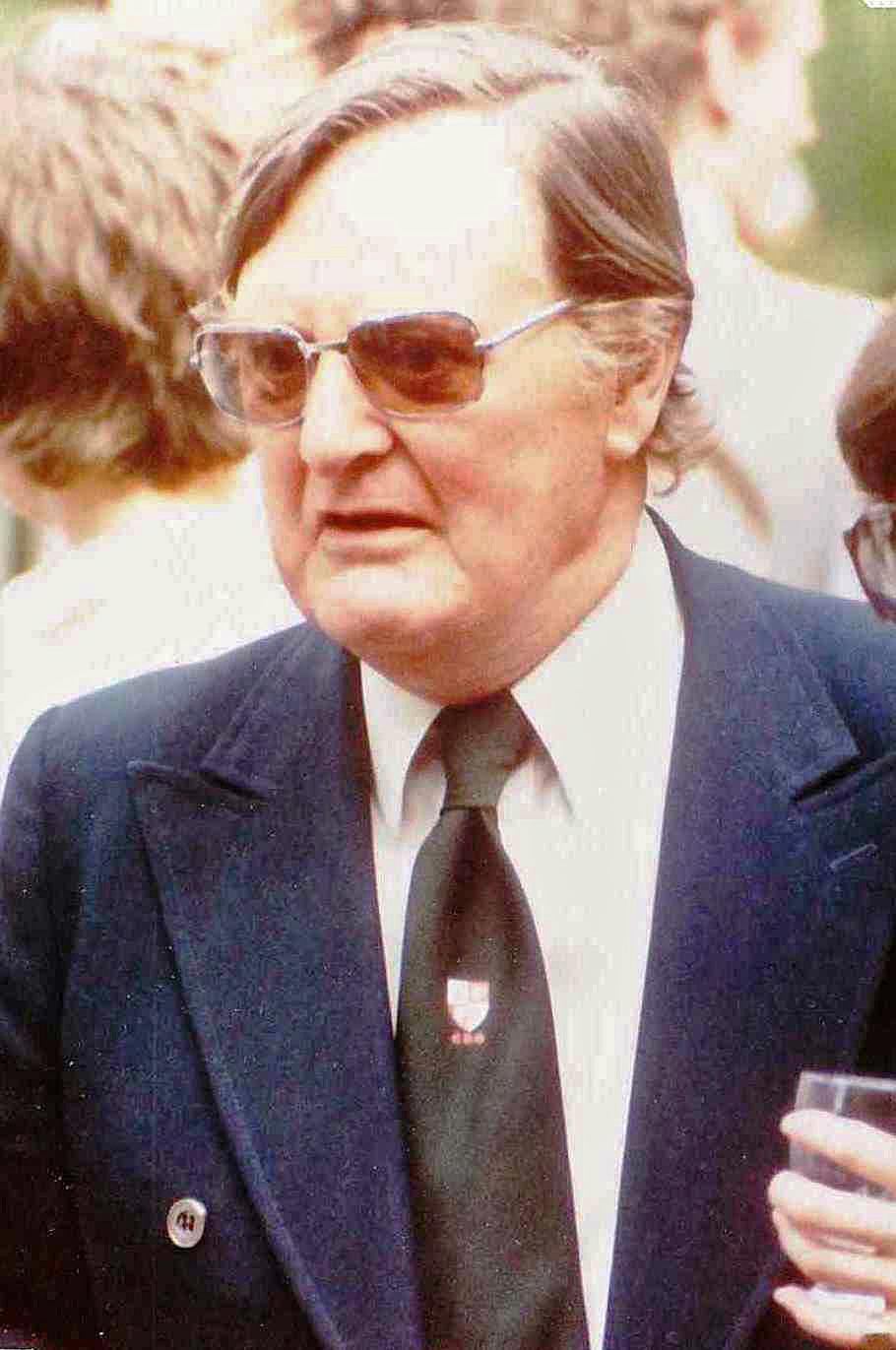 Unsurprisingly, our members are often asked “what is Real Gin?” In the Campaign’s early days, it was perhaps more a matter of taste and tradition. In a world of shrinking interest in gin, it seemed that Gordon’s Gin and its family members – Gordon’s Export and Tanqueray – were doing most to hold the line, and so the Campaign’s Articles laid down that these should be regarded as ‘Real Gin’. The seriousness of our intent may be measured by one of the other Campaign Articles – that men shall be men and bottles shall be empty.

We were fortunate that the marketing manager of Gordon’s, John Ingram-Halford, saw the joke, and became a real friend to the Campaign. He joined in a number of the Campaign’s early events, clutching oversized bottles, and invited us to to lunch at the old Goswell Road distillery in London. John is listed as Client Supervisor on the award-winning classic “It’s Got to be Gordon’s” advert of that era, with music by Jeff ‘War of the Worlds’ Wayne.

As recounted in our history, in 1992, Gordon’s announced the reduction of the strength of their gin from 40% to 37.5% proof. Gordon’s was dropped and for a while the Campaign adopted Plymouth, whose gin remains to this day at a sensible 41.2%.

Wind forward four decades, with gins, gin liqueurs and drinks purporting to be gin multiplying, it seems that the question of ‘what is real gin?’ needs to be addressed in a less tongue-in-cheek way.

With this in mind, the Campaign has put together the following guide. Readers expecting us to narrow down the field to one very specific method of gin production or a handful of brands will, however, be disappointed. Addressing the question properly requires an accurate answer, not a tongue-in-cheek one, or based purely on our preference.

The EU sets out quite clearly what constitutes gin:

Broadly, that’s it: all gins are made with ethyl alcohol flavoured with juniper berries and other natural flavourings. The ethyl alcohol used must be of agricultural origin, and distilled to the minimum standards laid down in the EU Spirit Drink Regulations. In all types of gin, the predominant flavour must be juniper, and they must have a minimum retail strength of 37.5% ABV.

This means that flavoured spirit drinks without a predominantly juniper flavour, and/or with a strength of lower than 37.5% are not ‘Real Gin’.

It may be instructive to consider the EU definition of vodka, and in particular flavoured vodkas. There are similar, though not identical, stipulations on the origin of the alcohol, the distilling process and the final ABV of 37.5%. On flavoured vodkas it goes on to say:

Producers have more or less free rein in terms of colours and flavours, but with gin the ‘in’ marketing term, perhaps it’s not surprising that some seek to hitch themselves to the bandwagon.

Read for yourself:
REGULATION (EC) No 110/2008 OF THE EUROPEAN PARLIAMENT AND OF THE COUNCIL of 15 January 2008 on the definition, description, presentation, labelling and the protection of geographical indications of spirit drinks and repealing Council Regulation (EEC) No 1576/89

The Gin section starts on page 37, and you can also read about vodka, liqueurs (minimum ABV 15%), sloe gin (“a liqueur produced by maceration of sloes in gin with the possible addition of sloe juice”, minimum ABV 25%), juniper-flavoured spirit drinks (minimum ABV 30%, may be marketed as Wacholder or genebra).

But are all ‘Real Gins’ equal?

Certainly not in pricing terms – very broadly, pricing tends to reflect the production process and strength, so let’s think about these.

Thanks to Foxdenton Estate for much of the following:

For a long time compound or ‘bathtub’ gin was associated with the cheapest brands, home-made brews and the Prohibition era. But examples such as Bathtub Gin have enabled it to stake its place in the ‘Real Gin’ market. The producer, Ableforth’s, makes a virtue of use of the cold compound method, claiming that it enables botanical flavours too delicate to survive distillation, to shine through. Counterintuitively, it also says that this is actually quite a high-cost means of production (reflected in its price).

Distilled gin is made in a traditional still by:

Hendrick’s is a well-known example of Distilled Gin, with infusion of cucumbers and rose post-distillation which means that it qualifies as a distilled but not London gin (see below).

London Gin is made in a traditional still by re-distilling ethyl alcohol in the presence of all natural flavourings used.

Thus ‘London Gin’ places arguably more of an emphasis on the art of the distiller who cannot fall back on adjusting flavours after the distillation. ‘London’ is essentially a term related to process and history, and gin produced anywhere can call itself ‘London’ or ‘London Dry’ so long as it adheres to the rules.

This is explained in an excellent article on The Gin Foundry, also why it believes that protecting the ‘London Dry’ appellation is so important.

There are further distinctions in the production process, the main one being between ‘one-shot’ distillations and gins produced by use of a concentrate. One-shot producers would often claim to be the holders of the holy grail of Real Gin; by far the majority of gins are made from concentrate.

One-shot distillation produces small quantities, and batches that are unique in character – hence most ‘hand crafted’ or ’boutique’ gins will tend to be produced this way, and producers will tend to emphasise this in their marketing. The botanicals are infused and macerated within the spirit, then distilled and diluted. Read Sipsmith on One-Shot Distillation.

Gins from concentrate (‘multi-shot’) are produced by using a much higher proportion of botanicals to spirit during distillation, giving a spirit of highly concentrated flavour, and subsequently mixing it with more spirit and water. This is more efficient on still usage, and some argue that it ensures a more consistent result.

Some smaller scale producers employ vacuum distillation. In this, botanicals are macerated in the normal way, but then the boiling of the spirit is performed in a vacuum. This enables a lower boiling point, which proponents argue involve less ‘cooking’ of the botanicals and therefore brighter, fresher flavours. The practicality of producing large quantities within a vacuum means that this method tends to be limited to smaller producers and smaller runs.

The minimum ABV for gin is 37.5%, but what is the right strength? Strength is tied to flavour. Since the flavouring of the botanicals is imparted to the spirit, it is logical that more spirit should mean more flavour – so long as the multi-shot producers aren’t too mean with their concentrate! (We learn that some producers are now experimenting with flavouring their water, but that’s a diversion.)

Famously, 57% is deemed ‘Navy Strength’, apparently because below that level, it failed to pass the ‘gunpowder test’: pass it through gunpowder, and the powder would not light. Beyond 57%, most consider that the spirit starts to dominate.

Having thundered against the dilution of Gordon’s to 37.5%, the Campaign could not easily endorse a gin below 40% without being hoist by its own petard (another gunpowder reference!). We would suggest that 45% to 50% ABV is perhaps optimal. Why then is our celebration Roaring Forties gin ‘only’ 40%? Well, after considerable deliberation, it was decided that we should celebrate our 40th Anniversary with 40% ABV. Just wait till our 50th!

A World of Real Gin to enjoy!

The good news is, therefore, that Real Gin comes in all sorts of forms, and literally there’s a world of gins for us to enjoy. To illustrate this, let’s finish with the following tutored tasting at the Gin Guild’s Ginposium 2018. David T Smith takes those present on a journey through some of his new favourites, with origins including Peru, India, Spain and Kenya; waters from sources including the Andes, the Himalayas and Iceland; ABV strengths from 40% to 44%; spirit bases including grape, wheat and sugar cane; botanicals introducing local characters; and even some flavoured gins.

To view a range of other videos and presentations from the Gin Guild’s Ginposium, visit their Ginposium page.