Despite sustaining serious injury during the match, Oliver Wise filed the following report on the day:

The 100th CRG cricket match was fittingly played where CRG cricket began in 1981: on the Pembroke College, Cambridge ground.

23 years on there was plenty of youthful vigour in evidence. The remarkable organizational skills of Noel and Nienke Manns enabled the CRG to field both teams (which would, at least, ensure that the CRG could not miss out on victory, in contrast to the record ten wicket loss to Whitchurch in the 99th match four weeks earlier). 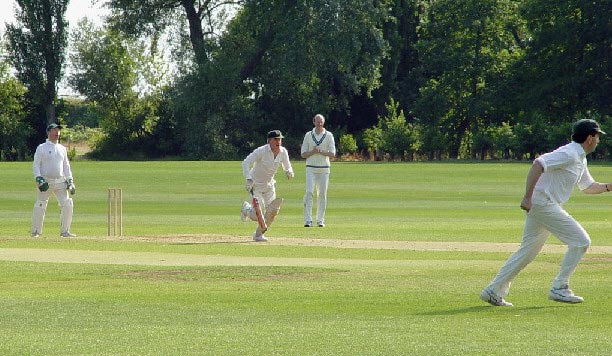 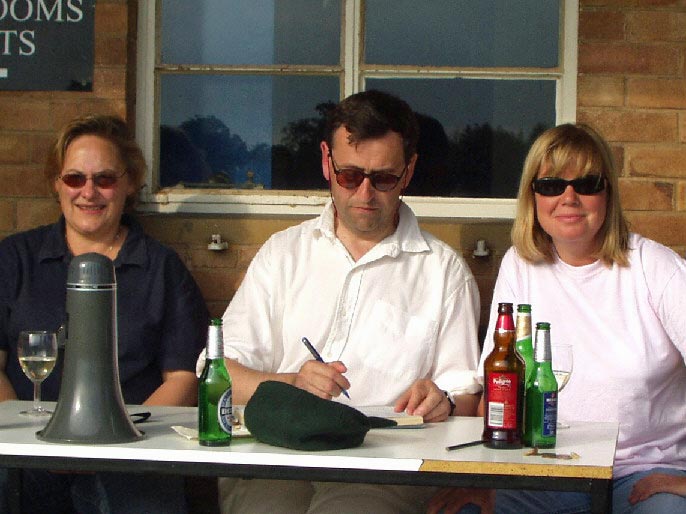 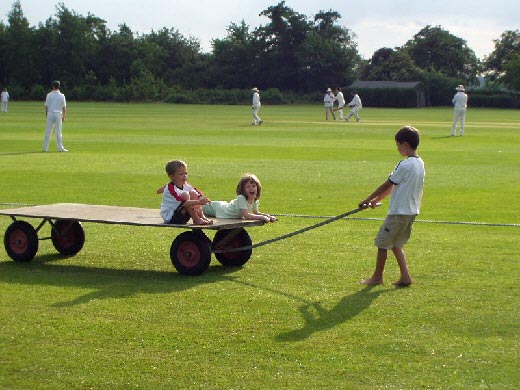 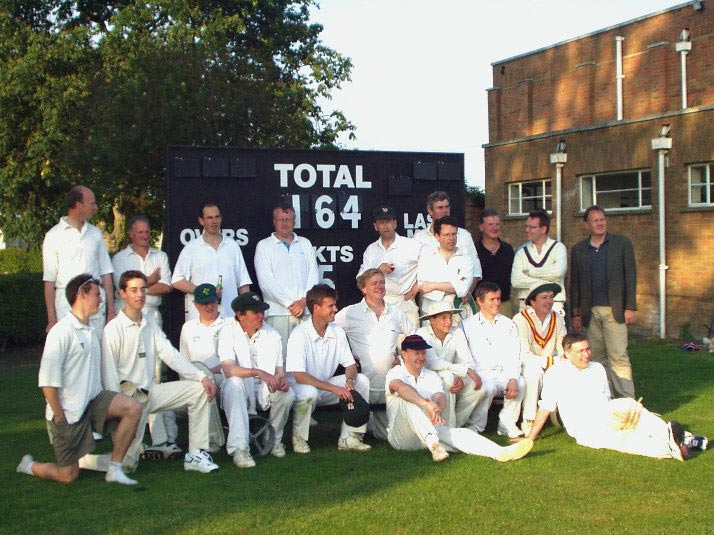 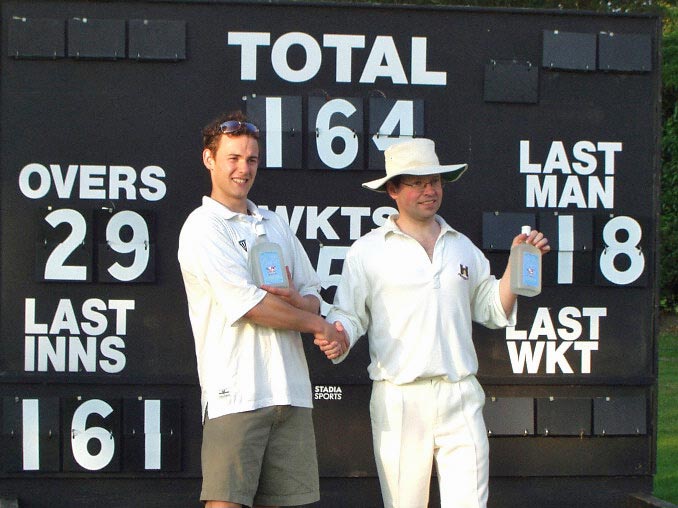 Phil Jackson made a special trip from Hong Kong to answer the recall to the CRG colours.

Manns picked the teams, and appointed the two senior pros as captains. Simon Goodfellow, skipper of the Indefatigables, invited Bob Gibson’s Invincibles to bat in a 30 over match.

Bill Krarup opened with a dashing 44, which included seven fours and a hook which nearly removed Oliver Wise’s left hand. Tight bowling by James Powell and Simon Goodfellow kept some restraint on a useful partnership between Krarup and Gibson (20). The leading innings was Tim Fancourt’s stylish 55 not out. Early gin and tonic was drunk during an interval in play due to some heavy rainfall.

The players’ concern for their own comfort rather than pitch protection was demonstrated by their ignoring the magnificent pitch
covers stationed outside the boundary while the rain poured down. Or perhaps the teams were quietly harking back to the uncovered pitches of the era of Peter May, the greatest of post-war Cambridge batsmen, a Pembroke undergraduate over 50 years ago.

Something of a late innings collapse was caused by three Invincible batsmen being run out, caused by characteristic CRG misunderstandings and unusually competent fielding. Chris Holden chipped in with 2 for 23. Giles Catchpole, fetchingly made up by Eleanor Wise and Isabel Manns, could manage only the dreaded cipher – bowled first ball by the former’s father. This brought in Charles Penney (vide the fifth verse of the CRG Calypso), with five balls of the innings remaining. Penney struck an on-drive towards the boundary off his second ball. “Leave it !” shouted Skipper Goodfellow,
mindful of the need to keep Fancourt from the strike. Penney was duly caught behind by Hugh Mathew-Jones off Wise’s next ball.

The Invincibles were all out for 161.

The magnificent tea, to which many contributed, had its effect, not least on the opening bowlers. Of special historic significance was Bruce Hogarth-Jones’ historic achievement of bowling two maiden overs.

Mathew-Jones (32) and James Powell (60) put on 69 for the first wicket. After contributions by Richard Maxwell (8), Dick Cawley (14) and Jackson (18), the match was at a critical stage; with Giles Goodfellow having taken 3 for 34 with a loopier trajectory than yesteryear. When Krarup bowled Jackson, eight runs were needed from 11 balls.

Magnus Eriksson strode to the wicket, sporting a new bat, new pads and new gloves; and determined to impress his new fiancée. Unselfishly, he played the ball behind point for a single, to give his captain the strike. Simon Goodfellow then scored a four, and a single off the last ball of the penultimate over.

Gibson himself took the ball for the final over. Simon Goodfellow hit the first ball for four. The Indefatigables had won by five wickets, with only five balls to spare.

The players joined the spectators, who had long been feasting on vast quantities of chicken, hamburgers, sausages, salads, and strawberries. Jacqueline Krarup presided over a very popular and well-organized bar.

The crowds of CRG old pals, families – including Nick Ellis, our beloved Hon. Sec – had had a great day – not least the young trailer riders and bouncy castle aficionados. The half-centurions, Tim Fancourt and James Powell were presented with bottles of Silver Spirit, the CRG’s own label gin. £300 was raised for the Peter May sports charity.

Many thanks are due to Noel and Nienke Manns, Bill and Jacqueline Krarup and Simon and Tamsin Goodfellow, along with many others who helped to put together a happy and memorable day.