September 6th 2018 saw the ‘Call Time on Fake Gin’ debate hosted by Hayman’s at their beautiful new distillery in Balham. The Campaign for Real Gin (‘CRG’) was represented by Jonathan Jeyes and Robert Gibson, and we must start by thanking Haymans for taking this initiative, and for their hospitality.

As explained elsewhere on this site, the origins of the Campaign for Real Gin (‘CRG’) go back to a time when gin was fighting its corner against a background of waning interest. Now, of course, gin is the hottest drink in town, and the problems of the category are quite different – how to control this ‘runaway train’ and ensure that standards are adhered to, consumers are not deceived, and their interests protected, and that the gin category’s long-term future is not devalued or subverted.

The purposes of the day were, therefore, to tease out these issues and take some decisions on how to move forward in pursuit of objectives identified during the debate. 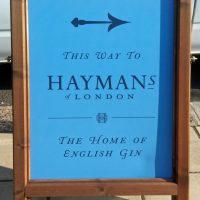 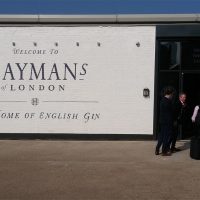 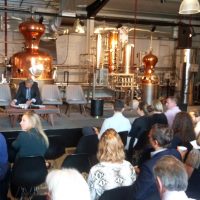 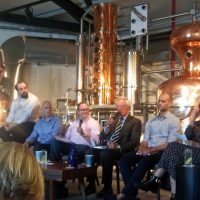 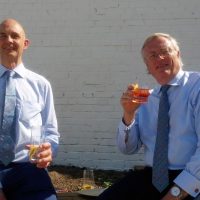 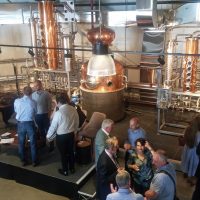 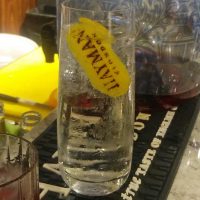 The general consensus and broad conclusions were not very different from what we had anticipated. Discussion centred largely around regulation and enforcement, and ‘education’ and transparency:

There are quite clear regulations on ‘what is gin’ – please visit our page The Essentials of Real Gin. It was explained that the 2008 EU Regulation had not simply been dreamt up by bureaucrats, but had been industry-led. However, in the ten years since, the landscape has changed dramatically, and some of the products which are causing concern, or just hard to categorise, weren’t considered then. The mood, therefore, was that there is no need for regulations to be torn up and redrawn; but consideration should be given to an additional category, or additional categories, in particular for flavoured gins and maybe aged gins. And it was stressed, too, that care should be taken not to stifle innovation.

A particularly strong line was taken against products claiming, either by producers or retailers or both, to be zero-alcohol ‘gins’ or ‘spirits’.

Rather than spending time on redrawing regulations, there was a strong mood that the industry’s focus should be on enforcing existing regulation. A number of contributors drew attention to other drinks categories which appear to be much more advanced in their thinking and organisation in this regard.

Gin has a much greater audience of consumers than could have been imagined a few years ago. Consumers come from many different angles: from those sufficiently interested to attend the debate, to those sitting on some beach mixing flavoured gins with 7 Up or Lilt; classic gin drinkers; gastronomes keen to understand all about ingredients and provenance; and the list goes on.

There was a consensus that the industry should rejoice in its expanded audience, but work harder on ‘education’, ‘giving a steer to’ the consumer in order to lift their expectations and enhance their experience. We have written elsewhere on The Gin Guild‘s work and in particular on their ‘Gin Note’ scheme, “a flavour guidance template designed to allow consumers, retailers and others, to benefit from access, across a wide range of gins, to a standard flavour summary of each of those gin brands”; this, or something like this, is a welcome innovation. There was also a concern about consumers being exposed to too many poor-quality gins. Two active commentators/competition judges remarked upon the declining proportion of new gins they had considered acceptable in most recent times. Consideration was given to a type of ‘red tractor’ scheme, but subjectivity on quality of gin – or even extent of ‘juniperiness’ – may inhibit this.

Education of retailers was also mentioned, to help them promote the category intelligently, and where necessary, to prevent them becoming unwittingly or even knowingly complicit in passing off non-qualifying drinks (such as liqueurs) as gin.

Where will Leadership come from?

A strong trade body can give leadership on both regulation and education, but it wasn’t obvious from the meeting where this leadership is currently. One might speculate that Haymans’ initiative stems from a similar concern.

Our researches show that one trade body, the Gin and Vodka Association, was closed down 8 years ago and its role folded into the Wine & Spirits Trade Association, and we wonder whether this may have created something of a vacuum. Haymans’ US distributor, represented on the panel, expressed surprise that the industry doesn’t seem more robust in its defence and promotion of the category; he was also adamant that in the US, gin is viewed as a quintessentially British product, so all the more reason to preserve this ‘item of British heritage’.

Maybe this need can be filled by or in association with The Gin Guild, created by the Worshipful Company of Distillers a couple of years after the disappearance of the Gin and Vodka Association. We think we detected a little concern over the extent of the influence of the distilling behemoths within The Gin Guild, and the need not to focus entirely on entrenched interests and the status quo at the cost of innovation.

The one concrete conclusion of the day was to set up a working party to represent diverse interests across the spectrum of producers, consumers, industry bodies etc. We shall therefore be hearing more on this subject in time.