The Cricket Club has been central to the CRG for many years. The team has travelled over England and even to Ireland to play the noble game and to further the campaign for real gin.

The first match was played in 1981 but it was not until 1984 that the cricket really got going. Well over 100 matches have been played over the years: all in the most sporting of spirits.

For this, great credit must go to our skipper, who has done most of the organization and played in 92 of the matches. Even more remarkable devotion has been shown by his wife Nienke, who has known the club for only about 16 hours less than she has known Noel. He took her to a CRG cricket match the day after he met her.

The CRG has had no home ground since it abandoned South Park in Fulham, but is fortunate in the excellent variety of village grounds where it is invited to play. Hospitality is reciprocated by the Campaign’s provision of gin and tonic for players and spectators at tea time.

CRG players are of varying ability: the standard ranges between those who were sufficiently distinguished in schools cricket to have their averages recorded in Wisden Cricketers’ Almanack, and those who might be regarded as rabbits. For the CRG the right spirit is all and no enthusiast is ever turned away. Indeed, if any cricketer of whatever standard would like to play for the CRG, he should contact our captain.

For those interested in statistics, a detailed analysis of the CRGCC scorebooks has been produced and can be accessed by clicking here. 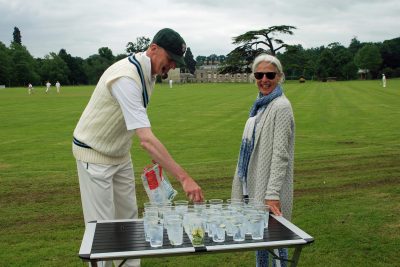 The CRG Cricket Club can claim to be responsible for the most positive development in cricket-drinking thought over the past 100 years since the following words were written by AG Steel, the amateur all-rounder who enjoyed great success in Anglo-Australian Test matches in the 1880s:

There are many opinions as to what is the best drink for men when actually playing. By best we mean that which does least harm to the eye. In hot weather something must be drunk, and the question is, What? Our experience is that gin and ginger beer is too sticky, sweet to the palate. In our opinion, shandy-gaff, sherry or claret, and soda are the most thirst quenching, the lightest, and the cleanest to the palate. The latter consideration is a great one on a hot day at cricket.”

The CRG has proclaimed the answer: gin and tonic, as clean to the palate as can be. It is according to the best authorities in large measure (and especially if the measure is large) the open secret of our success, as proclaimed in the CRG calypso.

The result of the first game – played on the Pembroke College, Cambridge ground in 1981 – is recorded only as ‘assumed drawn’. The subsequent records are better, and allow the historian to record – with only the odd guess – played 100, won 49, lost 40, drawn or assumed drawn 10. Many thanks are due to our splendid opponents and hosts: especially to Worstead, the Thatchers, Whitchurch, Almeley and the Jeremy Helme All-Stars, all of whom we have beaten and been beaten by, with much fun over many years.

There have been several successful CRG cricket club dinners, to all of which (unlike the formal Christmas dinners) ladies have been invited and welcomed. The pious hope that a CRG Ladies lacrosse/hockey/netball/rounders team would take to the field has not been fulfilled. Perhaps this will have to be left to the daughters of the CRG, who (thanks to the Hon. Sec. and the cricket captain – and their wives) probably outnumber the sons.